Coconut & Monkey King is a fun dexterity game  for children 6 years and older.

This game is great for developing eye-hand coordination, manual dexterity, visual discrimination, fine-motor precision, coordinated use of both hands, graded pressure and release, social interaction skills and exploration and participation.

To set up the game, give each player a game board, a monkey launcher, 8 coconuts, and 2 special cards. Set the cups up between the players.

How to play the game:

In turn, each player will shoot one coconut, attempting to get it into a cup. Place a coconut in the monkey’s hand, aim for a cup, pull down on his arms and launch (the monkey’s legs will need to be held down with one hand while pulling down on the arms with the other hand). If the player succeeds and the coconut doesn’t jump back out, he takes the cup and places it on his game board. If the cup is red, he will get to play again. If it is yellow, his turn is over. Use the cups to build a pyramid on your individual game board. Be the first to finish a pyramid created with six cups and win the game.

There are six types of special cards that may also be played throughout the game to make your life easier or more difficult as you play.

Before shooting the coconut, a player has to wait and see if the other players want to use one of their special magic cards:

IMPORTANT – Choking hazard. Not for children under 3 years. Be very careful around small children or any individuals who have a tendency to place inedible objects in their mouths. 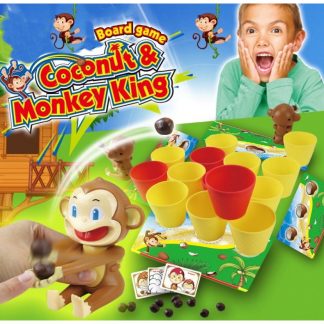